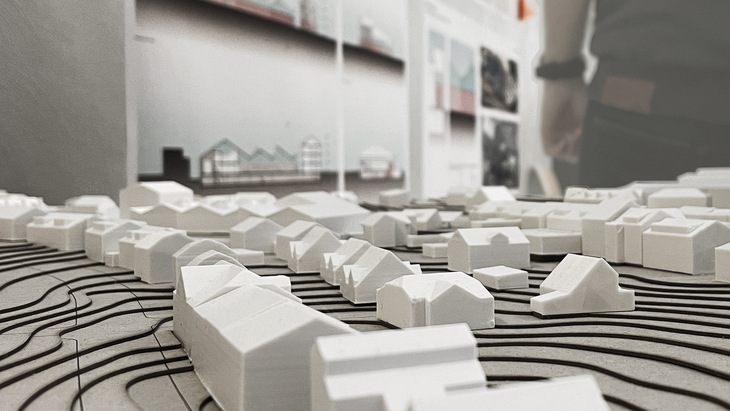 The periphery of larger cities threatens to fall behind in general development due to unfavorable structural features. This creates an ever-widening gap between structurally weak and strong regions. Reasons for this include the following:

The problems of the periphery contrast with important developments in society as a whole. Rising rents, housing shortages, climate change, location-independent working and progressive digitization are forcing and at the same time enabling an ever-increasing part of society to break away from the urban context of the big city.

Parallel to the historically grown inner city centres, the periphery could develop as a previously underestimated but livable place and manifest itself both in the digital and in the (re)built space for the peri.polis 2030.

Using the current example of the Aachen suburb of Eilendorf, an urban planning and architectural development process is to be initiated.

The focus in the first semester is on dealing with what is found, detecting problems and potential and the resulting development of programs for the Eilendorf market environment.

In the following semester, the developed programs are to be checked, optimized and worked out in studies and drafts.

In this cooperation project, an examination of an open and at the same time strongly site-related urban planning question is to be organized in the academic space. The Eilendorfer market is predestined for this in many ways.

Within the city administration of Aachen, the following departments are involved in the process:

• Department of Climate and Environment

The entire process is accompanied by regular exchanges with external urban planners and architects, the city of Aachen and the users or residents of Eilendorf.

2.1 Macro analysis of the town of Aachen Eilendorf